How To Turn Complementarians into Egalitarians 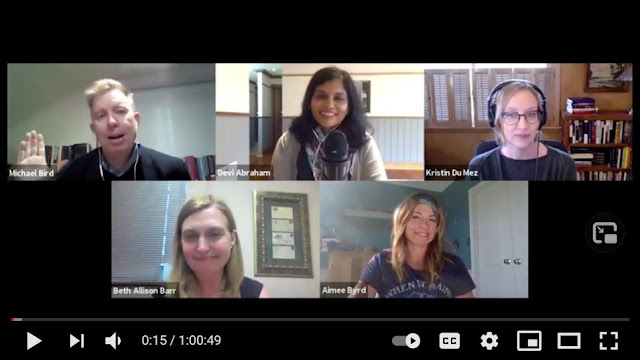 By Denny Burk - Posted at DennyBurk.com:

Mike Bird and Devi Abraham recently interviewed authors Kristin DuMez, Beth Allison Barr, and Aimee Byrd (see video below). All three of these authors have written books condemning complementarianism. Both DuMez and Barr are convinced egalitarians. While I have never heard Byrd own that label, she has said in her book that she is not a complementarian. In any case, it’s difficult to detect any daylight between Byrd’s position and that of the two egalitarians in this interview. They all three are very much opposed to complementarian theology, which is denigrated as abusive patriarchy in this interview.

One thing that they all three seem to agree on is the need for women to take on more teaching and leadership positions over men in churches. On this point, there was one revealing moment at the end of the interview that I think complementarians would do well to take note of. Devi Abraham asks the authors what one thing needs to change in evangelical churches, and Beth Allison Barr answers first with this:

You know, I would like for women to be able to teach Sunday School… In order for women to be accepted in leadership roles, we’ve got to put them in leadership roles… Lots of men have this story that their minds actually weren’t changed by what they read. Their minds were changed by hearing women. And hearing women teach and realizing they could be edified, that they could grow spiritually from hearing a woman. So I would really like for more evangelical churches to put women in adult leadership roles… So I’m not expecting pastorate immediately. Everything takes time. But just put them in more spaces where they actually can use these gifts. Don’t confine them only to women’s ministry and to children’s ministry and to the dream team in the kitchen. Put them out in leadership roles… Let women teach the Bible. Let them teach actual theology and good stuff. And let’s see them do it… If I could change one thing, I would put more women in adult Sunday School and teaching places in churches.

Notice that the endgame for Barr is to have women hold the office of pastor, but she recognizes that it’s unrealistic to expect complementarian churches to do that all at once. The strategy is to put women in teaching and leadership roles over men. After people see that a woman can fulfill the function of a pastor, they will be more open to accepting her into the office of pastor. The endgame is not teaching Sunday school. It’s the pastorate.
Read more here.
Church Government Complementarianism Feminism