PATRICK HENRY’S MARCH ON WILLIAMSBURG, MAY 1775 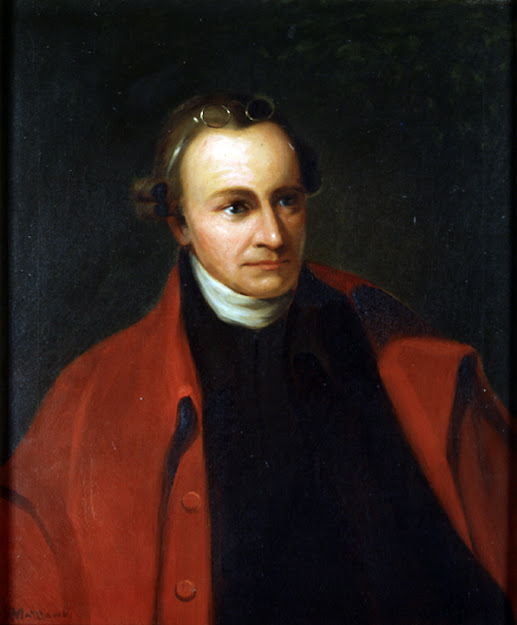 By Michael Cecere - Posted at the Journal of the American Revolution:
It had been a very hectic week in Williamsburg for Peyton Randolph, the Speaker of Virginia’s House of Burgesses and the President of the Continental Congress. It had begun with a startling alarm in the pre-dawn hours of April 21, 1775. The commotion just outside his house roused the corpulent Speaker from his bed. Like many in Williamsburg, he rushed to the scene of the alarm, the gunpowder magazine, which for Randolph was within view of the front door across of his home. When he arrived he discovered that a party of British Marines had absconded with a wagon load of gunpowder from the powder magazine.

The crowd at the courthouse grew increasing agitated at what they viewed as the theft of their gunpowder and most looked to the Royal Governor, John Murray, the Earl of Dunmore, for blame. Lord Dunmore was in fact responsible for the seizure of the powder and had arranged for its removal to a British warship anchored in the James River. He now braced himself for a confrontation, but to his welcome surprise, Williamsburg’s leaders, led by Speaker Randolph, managed to defuse the crisis. They appeared at the governor’s palace to express their concern and returned to the courthouse with Dunmore’s flimsy excuse for taking the gunpowder (his desire to insure the security of the powder from a possible slave insurrection) which the assembled residents of Williamsburg grudgingly accepted.

Despite several reports over the next few days of what amounted to temper tantrums by Governor Dunmore (with rash threats to free the slaves and burn Williamsburg if he or his supporters were threatened) the tense situation in the capital remained manageable. When reports that a thousand militia had gathered in Fredericksburg to march on Williamsburg reached the capital at the end of the week, Speaker Randolph sent the messengers back to Fredericksburg with his plea for them to disperse. Randolph assured his fellow Virginians that the situation in Williamsburg was well in hand and that their arrival might only upset things. Out of respect to Speaker Randolph, the militia in Fredericksburg dispersed. Yet another crisis had been averted, but only for a moment.

Patrick Henry, the firebrand orator from Hanover County who just a month earlier at the 2nd Virginia Convention in Richmond had uttered the phrase that he is still remembered most for, “Give Me Liberty or Give Me Death,” was surprised and disappointed when he learned that the militia gathered in Fredericksburg had cancelled their march on the capital. Days earlier, Henry had confided to two friends, Richard Morris and George Dabney, that Dunmore’s seizure of the powder was a fortunate circumstance that would awaken and animate the public...
Continue...
Labels: American History Christian Heritage Founding Fathers