“Bring Out Your Dead”: The Yellow Fever Epidemic of 1793 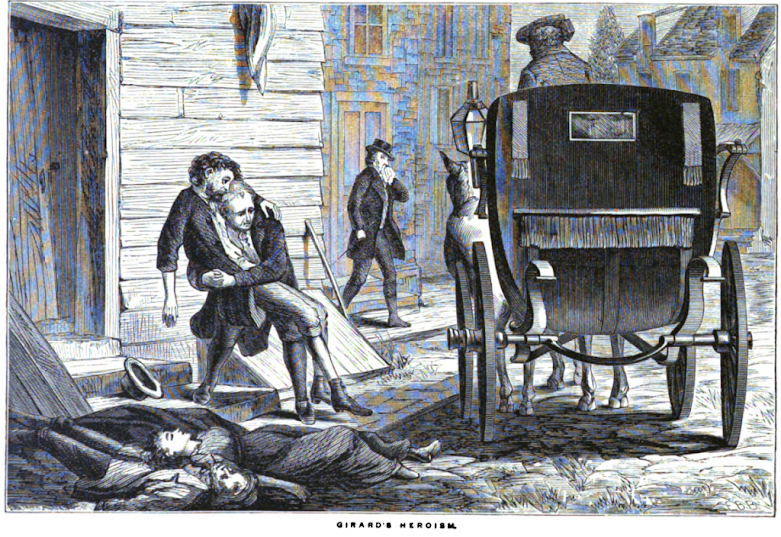 By Mark Maloy - Posted at Emerging Revolutionary War Era:
One of the worst epidemics in American history occurred in the then capital of the United States, Philadelphia, in the late summer and fall of 1793. The yellow fever epidemic of 1793 killed almost 10% of the city’s population and forced the young government of the United States and President George Washington to seek shelter away from Philadelphia.

The 18th century was full of epidemics including smallpox, typhus, influenza, measles, and yellow fever. Yellow fever (also referred to as ‘the bilious fever’) was a brutal disease to contract and suffer. Once a person got yellow fever they would come down with aches and a fever. The disease would then attack the liver causing jaundice which turned the person’s skin a yellow color (hence the name yellow fever). Shortly after that, they would begin to bleed from the mouth, nose, and eyes and vomit black blood. It would usually only take a few days for the person to die from the disease. Almost 50% of all those who contracted the disease died.

Yellow fever arrived in Philadelphia in the spring of 1793 when a ship carrying French refugees from the Haitian Revolution arrived from the Caribbean. In an era before germ theory, there were numerous erroneous thoughts as to the cause of this epidemic and how it spread. Many people assumed the fever was caused by putrid air from rotting produce on the docks since this is where the first cases appeared. Others blamed the refugees for bringing the disease into the city.
Continue...
Labels: American History Founding Fathers