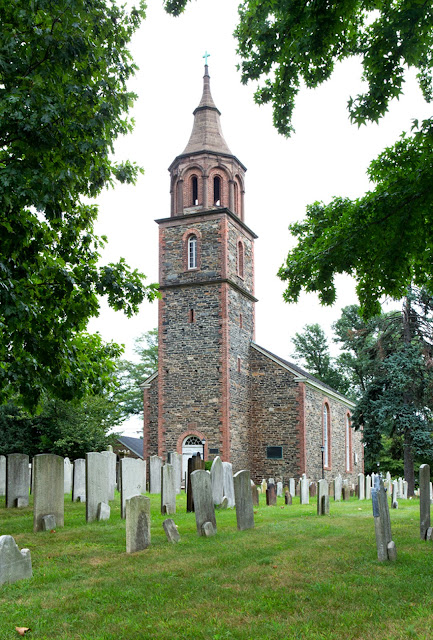 By Edna Gabler - Posted at the Journal of the American Revolution:

Nestled amid factories, automotive shops and diners in an industrial section of southern New York, just a short walk from the Bronx boundary, sits a little-known gem of the American Revolution, St. Paul’s Church. Partially completed at the time of the Revolution, the church served as a hospital first for American soldiers and, after the American loss at Pell’s Point, for British and Hessian troops.[1] Today the site is in the city of Mount Vernon, but this historic structure appears to the passerby much as it did over 240 years ago when Mount Vernon was part of Eastchester, New York.

St. Paul’s Church, originally called the Church at Eastchester, was a central focus of eighteenth-century life in Eastchester. Countywide elections, such as the 1733 contest between Lewis Morris, the favorite of the people, and the royal governor’s preferred candidate William Forster for a seat in the New York provincial assembly, were held on the church’s village green. The Morris-Forster contest drew one of the largest crowds for a political event in colonial America, the particulars of which were famously published in John Peter Zenger’s inaugural New-York Weekly Journal.[2] The 1733 election had long-term significance for the development of religious freedom in early America.

The people of Eastchester began building St. Paul’s in 1763 to replace a small wooden structure residents had used for worship since 1700. The original building, which stood about sixty to eighty yards from the current church, had been built by dissenters who opposed the Church of England. By 1702, however, Eastchester residents were forced by the British Crown to accept the Anglican religion.[3] This new church was inspired by those built in London in the mid-seventeenth century—the principal architect at the time being Christopher Wren—and depended on sketches and diagrams of English churches.[4] Local masons and craftsmen used stones from surrounding fields (hence the term fieldstone), while bricks were likely molded from clay deposits along the Hudson River.