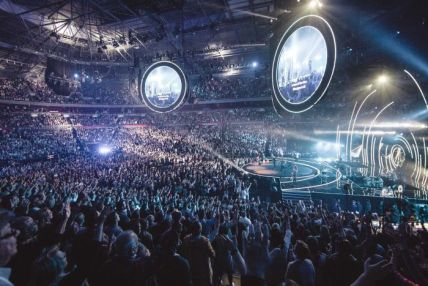 By Wes Bredenhof - Posted at YINKAHDINAY:

Hillsong is one of Australia’s most well-known exports. They’re known not only for their praise and worship music brand, but also for attracting celebrities like Justin Bieber. Prime Minister Scott Morrison recently spoke at a Hillsong Conference. He’s a member of a church that belongs to the Australian Christian Churches, to which Hillsong also belongs.

Hillsong is not just a church – it’s a global phenomenon. Around the world, over 130,000 people attend Hillsong each week. That could be a great thing if Hillsong was faithful to the Scriptures. If they were faithfully preaching the gospel and following the Word of God, Hillsong could have a powerful impact. But are they?

Last week, the ABC featured a piece on modern Pentecostalism in Australia. This is how it opens:

It is Sunday morning at Hillsong’s megachurch in the Sydney suburb of Alexandria, and Pastor Natalie Pingel pauses mid-sermon to conduct an impromptu Dwayne “The Rock” Johnson look-a-like contest.

She selects a group of buff parishioners and members of the band to line up on stage. Each takes turns flashing the crowd the actor’s signature raised eyebrow, to approval and gushing laughter.

Pastor Pingel then leads the congregation in prayer, the band plays anthemic rock music and the big screens either side of the stage light up with suggestions for what people can pray for.

The suggestions include financial stability, luck with job applications and visa approvals.


In these few words, there’s plenty indication that things are seriously wrong with Hillsong. Even though they’re Pentecostal and, as such, claim to give more attention to the Holy Spirit, in reality they’re missing some key things the Spirit says.