The Problem With Mr. Jones 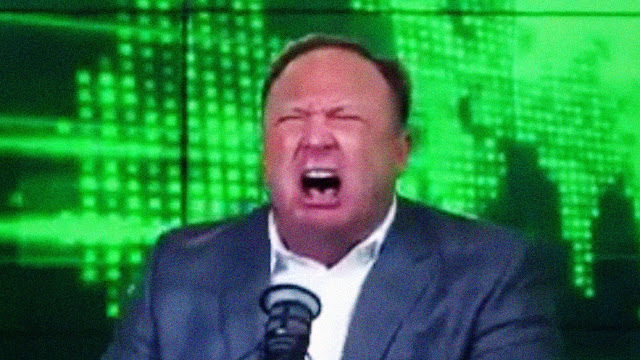 By Doug Evans - Posted at Asleep No More:

By now you've heard of the left wing shut down of Alex Jones, bull horn of the InfoWars website. I am not a fan of Alec Jones, I've seen a total of maybe 10 minutes of his raucous bluster and came away feeling like I lost IQ points.

Alex Jones is not a conservative like you and I would consider a conservative, he calls himself a "paleo-conservative" a title which I claimed for myself about 1.4 seconds after the left coined the phrase "neo-conservative". Alex is actually a Ron Paul libertarian. If you've never heard of Alex Jones or heard his bellicose tirades, do not feel like you missed anything. Mr. Jones is loud and bold and quite often dead wrong and to be honest I'm thankful for the quiet on YouTube and can get back to things more important than his anger. I am a very strict strict constructionist so I don't have any first amendment concerns here, but I do have some serious freedom of speech concerns (they are two different things), but discussion of that is for a different forum.