Archibald Campbell, Marquis of Argyle: 'His Blood Baptized the Cause of Freedom, Conscience, and Pure Religion' 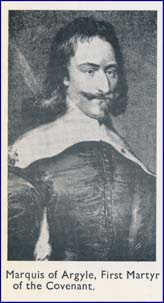 Earls, barons, lords and marquis — these titles are foreign to countless Americans. Yet to those in Scotland and England, they are the stuff of ancient times, with some left over to the modern age. We are interested in the last title, but only as it referred to the Marquis of Argyle, Archibald Campbell. From an early period in Scottish history, his ancestors played a prominent part. Vast domains were under their rule, with great power exhibited by this house. It was said, for example, that today’s subject, Archibald Campbell, could have fielded an army of twenty thousand soldiers. Well, you could imagine the gratitude of God’s people when Archibald Campbell joined the Covenanting Presbyterians at a General Assembly in 1638.

At the first and last coronation ceremony in which King Charles II was crowned in Scotland, which we developed for our readers on January 1, it was this Marquis himself who placed the crown on the head of Charles the Second. We also saw that such early support would be repaid with years of persecution for Scottish Presbyterians, including the Marquis of Argyle himself. When Charles finally ascended to the throne, Archibald Campbell traveled south to congratulate him. He never arrived in London, but was arrested on the journey there on February 7, 1661. Clapped into the Tower of London, he lay in chains until the following winter. Then he was sent back to Scotland to be tried on everything from having signed the Solemn League and Covenant, to submission to Oliver Cromwell, to being acquainted with the plot to kill King Charles the First.