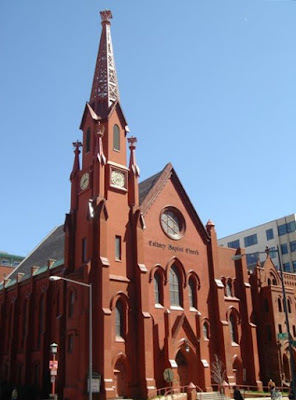 WASHINGTON (BP) -- A Washington D.C. church's decision to call a legally-married lesbian couple as co-pastors has led a fellow District of Columbia Baptist Convention pastor to call for "prayerful dialog" between convention leadership and the church. A Southern Baptist Convention seminary president suggested the DCBC should disfellowship the congregation.

Meanwhile, DCBC executive director Robert Cochran told Baptist Press the convention has "no plans to disassociate" with the church and he "has never discussed the issue of homosexuality with" the congregation's leaders.

Calvary Baptist Church in Washington -- a congregation that voted in 2012 to cease cooperation with the SBC -- approved Sally Sarratt and Maria Swearingen Jan. 8 as its new senior ministers, according to a news release from the church. The two women were married in 2014, according to media reports.

Lyles, a former president of the National African American Fellowship of the SBC, said he finds it "difficult" to affirm same-sex marriage "with a biblical basis."

When it comes to cooperation within a state Baptist convention, "I would hope that lines would be drawn," Lyles said. Though each local church "is a sovereign body, I would think that if a church is moving" toward affirmation of homosexual behavior, convention leaders should "have a serious dialogue and prayerful discussion with them."