Review of Douglas Wilson's, Reformed Is Not Enough 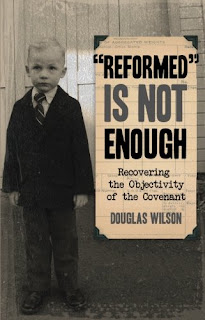 Contemporary Reformed theology has become gnostic in recent years, argues Douglas Wilson in his latest book entitled, Reformed Is Not Enough: Recovering the Objectivity of the Covenant (Moscow, Canon Press, 2002, 206 pp., $14.00, paper). What does Wilson put forth in his book? There are positive things about his book; he affirms various orthodox doctrines and interacts with historic Reformed teaching. There are, however, negative things about this book. Let us therefore first turn to Wilson’s case and then critique his arguments.

Wilson argues that Reformed theology has become gnostic in its belief that the invisible church is more significant than the visible church (pp. 70ff). This has happened as a result of the influence of enlightenment rationalism. In fact, Wilson builds on the current popular acronym Truly Reformed (TR) and argues that current Reformed thought should be labeled Enlightenment Truly Reformed (ETR). In contrast, Wilson argues that what is needed is a recovery of the historic Reformed faith as well as an improvement upon traditional Reformed concepts and doctrines (pp. 7-9). How does he propose to halt ETR theology?

Wilson argues that the remedy to this gnostic and rationalistic plague is recovering what he terms, "the objectivity of the covenant." Wilson means by this that we must view the church, not in terms of visible and invisible, but as the historic and eschatological church (pp. 70-74). First, by use of this distinction, an improvement upon traditional nomenclature, it removes the idea that what is invisible, or spiritual, is superior to what is visible, or material. Wilson’s new terminology highlights the distinction between the present and final forms of the church, i.e., the mixed body of believers and non-believers and the church as the company of the elect. Wilson argues, that these terms keep gnosticism, or the exaltation of the immaterial, at bay. To support this concept, namely the historic and eschatological church, Wilson offers some practical and theological ideas.

The first solution that Wilson offers to combat gnostic Reformed practice is to take people at their baptism. Wilson argues that because ETR’s value the spiritual more than the material, they ignore a person’s baptism, their engrafting into the covenant, and search for the spiritual state of a person’s soul (p. 34). Rather than trying to peer into a person’s soul searching for faith, the gnostic immaterial realm, we must accept the face value of their baptism. Wilson carries this thinking into other doctrinal areas. The objectivity of the covenant, accepting baptism at face value, under girds his understanding of who may participate in the Lord’s Supper. All baptized adults and children should be admitted to the table on the basis of their baptism, not a profession of faith (pp. 115, 185). This is not to say that Wilson has no place for a profession of faith. Wilson does argue, however, that emphasis must be placed on the objective elements of the covenant, what is visible, not on what is invisible. This view has implications for Wilson’s understanding of the greater ecclesiastical picture.