Would Defunding Hitler Have Been Enough?

By Dr. Patrick Johnston - Posted the the Johnston Family Ministry.com: 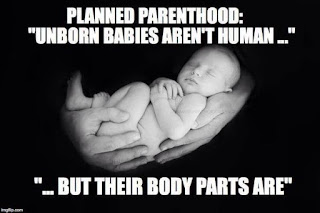 Picture it: masses of bone-thin, naked bodies piled outside of barb-wire-fenced camps. Testimonies of grisly experiments being performed on Jewish twins. Whole warehouses with tall piles of shoes, empty suitcases, watches, jewelry, and lampshades made from the skin of Jews.

Up sounds forth the cry from America! “Defund them!”

How about "Prosecute them!" or "Try them for crimes against humanity!" or "Hang them from the neck until dead!" All the rage is over selling aborted baby body parts – and there should be rage. However, would the crime had been any less brutal if they’d have given their victim an honorable burial with the tune of taps? Why not harness the public rage and direct it toward an end that would protect the threatened children, like criminal prosecution? Why not prosecute those who dared to fund them in the first place, knowing they were aborting babies?

Watch this unbelievable footage of a 2 ½ inch-long, ten-week-old freshly removed fetus flexing her trunk and her arms and legs before being disposed of by the abortionist. Would this abortion somehow be worse a crime if they’d have dissected the organs?

The fifth viral video expose of Planned Parenthood reveals the director and personnel meticulously going through a small bucket of body parts from “a twin” – showing arms, legs, hands, eyes, and lungs – proudly displaying them to the body-parts buyers. That was as ghastly as anything Dr. Josef Mengele ever did. (Begin watching at the 10:00 minute mark of the video to witness this evidence for yourself.)

Remember Josef Mengele? He was the Nazi physician known as “the angel of death.” ...