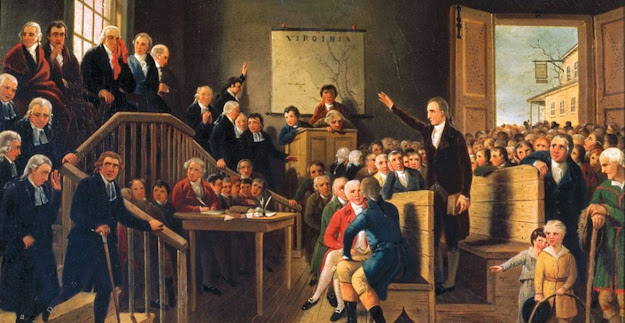 “The Shorter Catechism fought through successfully the Revolutionary war.”—A.A. Hodge.

Civil liberty and religious liberty go hand in hand. As men settle the question of church power, so they are likely to settle the question of civil power. If they rest church power in the clergy they are likely to rest civil power in kings and nobles. Hence the remark of Lord Bacon that “Discipline by bishops is fittest for monarchy of all others.” If, on the other hand, men rest church power in the people, in the church itself, as Presbyterians do, then they will hold that civil power also rests in the people, and that all civil rulers are the servants of the people. So Dr. Paxton has said, “If there is liberty in the church there will be liberty in the State; if there is no bishop in the church there will be no tyrant on the throne.”

Hence it is that modern tyrants have with one consent recognized that Presbyterianism was their natural enemy and have hated and feared it accordingly. Charles II. pronounced Calvinism a religion not fit for a gentleman. Charles I. said: “The doctrine (of the Presbyterians) is anti-monarchical,” and he added that “there was not a wiser man since Solomon than he who said, ‘No Bishop, no King.’” James I., born and reared a Scot, spake what he knew when he said at the Hampton Court Conference, “Ye are aiming at a Scots Presbytery, which agrees with monarchy as well as God and the devil.” History has demonstrated that the views thus expressed by the Stuart kings were absolutely correct. By its doctrine of personal liberty Presbyterianism has emphasized the worth of the individual. By its republican polity it has rested the power of government in the people, and administered it through representatives of the people chosen by the people. And, as a natural consequence, it has in every age been the chief educator of the people in the principles of civil liberty, and has in every land reared the noblest champions of human freedom. And so the Westminster Review, which is certainly no friend of our faith, says: “Calvin sowed the seeds of liberty in Europe,” and again, emphatically, “Calvinism saved Europe.” Castelar, the eloquent Spaniard, says: “The Anglo-Saxon democracy is the product of a severe theology,” learned in the cities of Switzerland and Holland, “and it remains serenely in its grandeur, forming the most dignified, most moral, most enlightened and richest portion of the human race.”
Continue...
Labels: American History Christian Citizenship Christian Heritage Presbyterian History