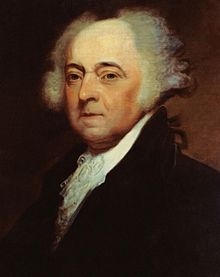 By David W. Hall - Posted at This Day in Presbyterian History:

In a 1775 letter, Adams spoke of “human nature with all its infirmities and depravities,” and then continued to affirm that it was capable of great things. Instead of the exclusion of the church from the state, he called for the pulpits to “resound with the doctrines and sentiments of religious liberty.”

Equal in importance to James Madison in arguing for independence and ratification of the constitution was John Adams, who was also equally influenced by the heritage of Calvinism. In his diary entry for February 22, 1756, Adams wrote: “Suppose a nation in some distant region should take the Bible for their only law-book, and every member should regulate his conduct by the precepts there exhibited! . . . In this commonwealth, no man would impair his health” with vice, but would live together in frugality, industry, “piety, love, and reverence towards Almighty God. . . . What a Utopia; what a Paradise would this be!”

In 1775, the second President of the United States attended the Old Pine Street Presbyterian Church in Philadelphia. The preacher on that occasion, The Reverend George Duffield (who was later targeted by the British) preached a revolutionary sermon that made quite an impression on John Adams. Adams wrote to his wife on June 11, 1775, that Duffield’s preaching was reminiscent of the fiery expositions he had been accustomed to back in Massachusetts. Duffield applied the prophecy of Isaiah 35 to America and “gave us as animating an entertainment as I ever heard. He filled and swelled the bosom of every hearer. . . . by this you will see that the clergy this way are but now beginning to engage in politics, and they engage with a fervor that will produce wonderful effects.”

Adams would later refer to himself as a “church going animal.” By any estimation one of the most important figures for the founding of America, Adams, nevertheless, did not identify himself as a Calvinist. Toward the end of his life, he championed anti-Trinitarian legislation, and bitterly reviled Calvinists, on occasion, as “snarling, biting” divines. However, the impress of Calvin was so deep on Adams’ predecessors that a certain Genevan fingerprint is indelibly inked on Adams’ writings. Adams believed that knowledge in general could dispel “arbitrary government and every kind of oppression.” In his 1765 Dissertation on the Canon and the Feudal Law, he recognized lust for power as the root of slavery. This yearning for dominion was both the cause of much oppression and the effect of human depravity.

Rights, which Adams saw as general but not purely secular, were derived from the “great Legislator of the universe.” Human rights were squelched when human rulers wrested from the people the inalienable grants given by this great Legislator. Liberty was also derived from humanity’s Maker, and the right to knowledge came from the great Creator, certainly not from a secular basis.