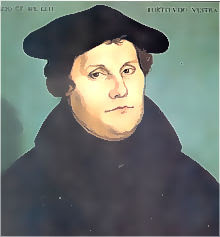 In May 1525, Luther wrote Against the Rioting Peasants against the Peasant Rebellion (1524-26), whose leaders had even been appealing to the Scriptures and the Reformers to justify their violence in the pursuit of “justice”:

The peasants have taken upon themselves the burden of three terrible sins against God and man; by this they have merited death in body and soul... they have sworn to be true and faithful, submissive and obedient, to their rulers... now deliberately and violently breaking this oath... they are starting a rebellion, and are violently robbing and plundering monasteries and castles which are not theirs... they have doubly deserved death in body and soul as highwaymen and murderers... they cloak this terrible and horrible sin with the gospel... thus they become the worst blasphemers of God and slanderers of his holy name.


Luther justified the use of lethal force by the German princes against the peasants, citing Paul’s teaching on the role of the civil authorities to maintain order: ...