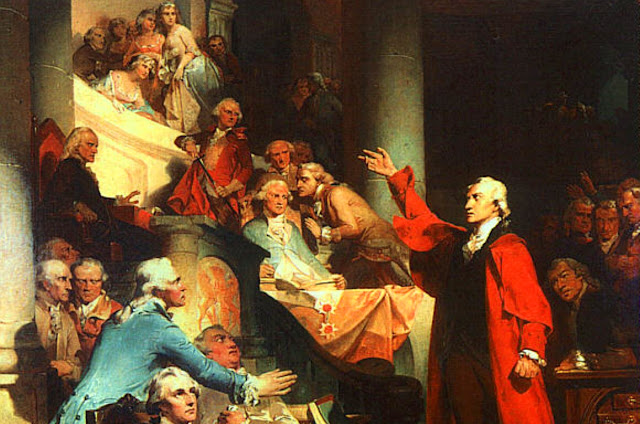 By Rev. David T. Myers - Posted at This Day in Presbyterian History:

The godly mother believed in taking advantage of all kinds of spiritual opportunities to instruct her second son in the things of the Lord, even if it meant a long journey home from church by their horse-drawn buggy. So she would quiz young Henry on the text and have the twelve-year-old summarize the long sermon by the Rev. Samuel Davies. And remember, the latter “Apostle to Virginia” usually preached an hour or two sermon at the Presbyterian meeting-house known as The Fork. Later, when grown up and active in the affairs of the Colony and later state of Virginia, Patrick Henry would remember those dozen early years under the ministry of Presbyterian pastor Samuel Davies. He stated his appreciation for sitting under the greatest orator he had ever heard.

Now by no means are we inferring that Patrick Henry was a Presbyterian. His mother Sarah was a Presbyterian and a member of the church of which Pastor Davies was a pastor. Patrick’s father, an Anglican, had baptized young Patrick in the Anglican church, and to that early tradition, Patrick stayed faithful all of his life. But he was especially friendly to the Presbyterians, who helped immensely the cause of liberty in those early days.