THE TRAGEDY OF HENRY LAURENS 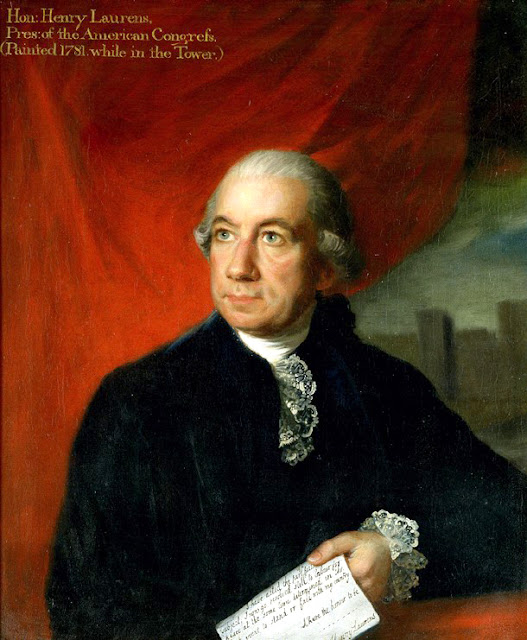 By Gabriel Neville - Posted at Journal of the American Revolution:

It wasn’t really their fault, they said. Slavery, men of the founding generation liked to argue, was brought to the colonies by Britain. It came via Barbados and the other sugar islands of the Caribbean. Thomas Jefferson and Henry Laurens both blamed Britain and wished the colonies could free themselves of the practice. It was ironic, therefore, that American slavery not only outlasted the War for Independence but also outlasted slavery in the British Empire. In truth it was more than ironic: it was a tragedy that led to additional decades of forced labor and the deaths of well over half a million Americans in the Civil War.[1]

Could the abolition of American slavery have come sooner? Maybe. Slavery never existed in the New World without someone also speaking out against it, and antislavery views took a demonstrably large leap forward during the founding era. Christianity, social contract theory, and the very spirit of the Revolution led many Americans to the same conclusion. Even many slaveowners understood it was wrong. “I can only say,” wrote George Washington about slavery in 1786, “that there is not a man living who wishes more sincerely than I do, to see a plan adopted for the abolition of it.”[2]

Thomas Jefferson memorably condemned slavery in his first draft of the Declaration of Independence. While this language was removed by Congress, Jefferson really did want to effect a change. His concurrent draft of a Virginia constitution would have decreed, “No person hereafter coming into this country shall be held in slavery under any pretext whatever.” A decade later, he wrote that “The whole commerce between master and slave is a perpetual exercise of the most boisterous passions, the most unremitting despotism on the one part, and degrading submissions on the other. Our children see this, and learn to imitate it; for man is an imitative animal.”[3] His concern was not just for Virginia’s children:


And can the liberties of a nation be thought secure when we have removed their only firm basis, a conviction in the minds of the people that these liberties are the gift of God? That they are not to be violated but with his wrath? Indeed I tremble for my country when I reflect that God is just: that his justice cannot sleep forever: that considering numbers, nature and natural means only, a revolution of the wheel of fortune, an exchange of situation is among possible events: that it may become probable by supernatural interference! The almighty has no attribute which can take side with us in such a contest.[4]

Even more counter-cultural than Jefferson was Henry Laurens of South Carolina who strongly (but privately) condemned slavery in the summer of 1776. He did this in Charleston just a few months before he succeeded John Hancock as president of the Continental Congress. The cogency of Laurens’s condemnation begs for speculation about alternate futures. Could his sentiments, wealth, stature, and office, have altered the future of slavery in America? What if he had been more courageous? What if he had accepted a seat in the Constitutional Convention? Or, some have asked, what if he had only believed in public what he said in private?[5] 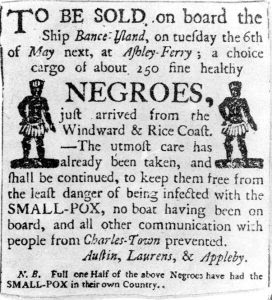 A circa 1760 advertisement for a slave sale by Henry Laurens
and his business partners published in a local newspaper .
(National Park Service)