Go Big or Go Home: The Cost of Christianity 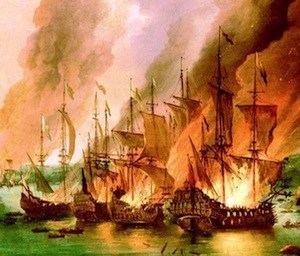 In 1517, three ships under the command of Hernández de Córdoba sailed west and explored the Yucatán peninsula. Upon arrival, the soldiers disembarked but were attacked at night by Mayans armed with arrows and spears. Twenty soldiers died, including de Córdoba himself. The surviving crew faced a choice: stay and complete the exploration, thereby gaining historical renown and reward from their governor, or get back on their ships and hightail it out of there. They chose the ships and sailed home in a hurry.

Two years later the expedition was attempted again, this time commanded by Hernán Cortés. He was so committed to the mission that he sold everything he had to finance it. He sailed with 11 ships, manned by 100 sailors and 500 soldiers. Legend has it that when he landed at Veracruz, Mexico, he told his crew to offload everything they had brought with them. He then set fire to all 11 ships.

Imagine the 600 men standing on the beach watching their only way back home burning to ashes. No matter how fierce the fighting would be, retreat was not an option.

Jesus calls us to burn our ships. He wants the same dedication and unflinching commitment to all who call themselves his followers. When you turn to Christ you set ablaze the boats that could take you back to your old life. With that in mind, let’s consider Luke 9:57-62.