Being a witness: an interview (of sorts) with Francis Schaeffer 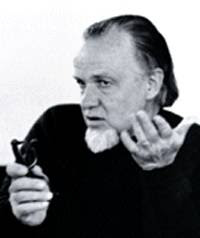 Francis Schaeffer (1912-1984) has long since been retired from his earthly duties, but the Presbyterian pastor, philosopher, and apologist was still up for an interview (of sorts) on the desperate need for a clear Christian witness in the public square.

The text in bold is his own words, taken from his book A Christian Manifesto.

JON DYKSTRA: A Christian Manifesto was your last book. Why did you feel the need to write it?

FRANCIS SCHAEFFER: It was intended as a rallying cry for Christians, to stand up against the world’s humanist worldview, by offering up God’s own. The basic problem of the Christians in this country…in regards to society and in regards to government is that they have seen things in bits and pieces instead of totals. They have gradually become disturbed over permissiveness, pornography, the public schools, the breakdown of the family, and finally, abortion. But they have not seen this as a totality – each thing being a part, a symptom of a much larger problem. [We] have failed to see that all of this has come about due to a shift in…. the overall way people think and view the world and life as a whole. This shift has been away from a worldview that was at least vaguely Christian…toward something completely different – toward a worldview based upon the idea that the final reality is impersonal matter or energy shaped into its present form by impersonal chance.

The phrase “separation of church and state” has been used to push Christians to the sidelines in politics, and we have, for the most part, gone willingly. Christians have forgotten that the Lordship of Christ covers all of life and all of life equally. That includes politics as well. A Christian Manifesto is a call for Christians to reenter the public square as Christians. It argues that the Christian worldview is absolutely vital to civil society and we need to share it with them.