ROGER SHERMAN: THE ONLY MAN WHO SIGNED ALL FOUR FOUNDING DOCUMENTS 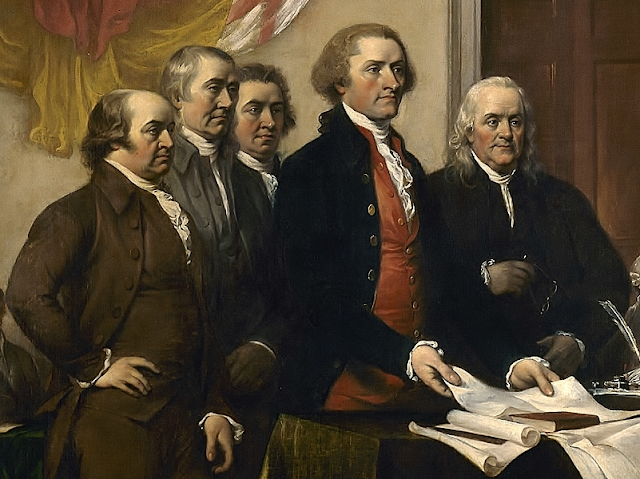 By Richard J. Werther - Posted at the Journal of the American Revolution:


Nicknamed “The Old Puritan,” he cut a distinct figure in the congresses and the Constitutional Convention with his reserved and plainspoken ways.

Thomas Jefferson stood outside the halls of congress late one afternoon. And with the hand that penned the Declaration of Independence, he pointed across the steps and said in a loud voice to those assembled around him “There goes a man who never said a foolish thing in his life”.[1] The Federalist Fisher Ames once said, speaking of the same man “If I am absent during the discussion of a subject, and consequently know not on which side to vote, I always look at [him], for I am sure if I vote with him I shall vote right.”[2]

It wasn’t Washington, Adams, Madison or any of the marquee names we associate with the birth of this nation. And this man was the only man to sign all four of the documents (The Continental Association, The Articles of Confederation, The Declaration of Independence, and The Constitution) that transformed thirteen English colonies into these United States.

How can it be, that a man who was there at every turn during the birth of this nation, who had the respect and admiration of the great men around him, has a name that escapes us?

Like Jefferson did so long ago I would like to direct your attention to the object of his praise – Roger Sherman of Connecticut. Like Franklin and Hamilton, Sherman was successful at a young age, after being born into challenging circumstances. Also like those men he knew how to leverage the opportunities at hand. In his case there were two, the robust library left to him by his father, and a mentor in the person of Samuel Dunbar, the Harvard-educated minister who tutored him in mathematics, sciences, literature and philosophy.[3]