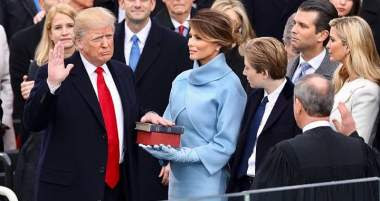 The mainstream media have rejoiced because they perceive that President Donald Trump has abandoned policies and changed long-held positions that they have considered anathema. Politico said the president has “demonstrated an incredible willingness to bend his past positions, or abandon them entirely. Sometimes he offers an explanation; sometimes not.” CNN called them “stunning U-turns on key issues” reflecting “extraordinary political shape-shifting.”

The “key issues” are Syria, Janet Yellen of the Federal Reserve, NAFTA, NATO, his hiring freeze, China’s currency manipulation, and the Export-Import Bank.

Syria tops the list currently as the president, who promised to keep the United States out of protracted conflicts in the Middle East, has instead deepened its military involvement with a barrage of missile strikes on a Syrian airbase in retaliation for a poison gas attack on civilians.

The problem is that, back in 2013, after Syrian President Bashar al-Assad was accused of using sarin gas against his own countrymen, private citizen Trump tweeted on August 29, “What will we get for bombing Syria besides more debt and a possible long term conflict? Obama needs Congressional approval.” On September 5 Trump tweeted again, “Obama’s war in Syria has the potential to widen into a worldwide conflict.” Seven days later he tweeted, “We should … stay out of Syria and other countries that hate us.”