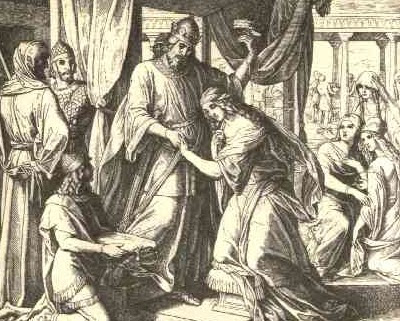 Posted at Design of Providence:

Recently I saw Lou Engle's Twitter account posting tidbits on Esther. Soon after, people began using the #IAmEsther hashtag. I went to Lou Engle's website, and found an article that explained this new movement coming from his group. The article is entitled For Such a Time as This; the title is taken from Esther 4:14b, in which Mordecai says to Esther, "And who knows whether you have not attained royalty for such a time as this?" As I looked into it, I realized it was mishandling of scripture which may cause confusion, heartache, and exhaustion among its adherents, and so I felt compelled to write a response.

As I've done in the past, any direct quotations from the article will be colored purple for visual organization. I'll be quoting the article in full, albeit in chunks, but feel free to click on the link and read through the whole thing first.


The Story of Esther


Before we jump into the article, I think it's important to pause and discuss the story of Esther, and how it relates to believers.

The story of Esther takes place shortly after the fall of the Neo-Babylonian Empire, which was conquered by the Medes and Persians. The Jews are still in captivity. The king, Ahasuerus, after several days of drinking, sends for his wife Vashti to come before him to show off her beauty. Vashti refuses, causing the king to not only be angered, but his advisers to worry that this conduct will encourage other noblewomen in the empire to act similarly (Es 1:12-18). Therefore, the king calls for select virgins to be brought before him, and the one he likes best will become the new queen (Es 2:3-4). At the same time, there lives in the capital Mordecai, a Jew who is caring for his late uncle's daughter, Esther, a "young lady" who is "beautiful of form and face" (Es 2:7). Esther ends up being taken to the palace, where the king eventually falls in love with her, and appoints her queen (Es 2:17). Mordecai gains the king's favor after uncovering an assassination plot, and ends up increasing in rank as well (Es 2:21-23).