She refused to convert to Islam, was killed by ISIS, becomes a martyr for Christ! 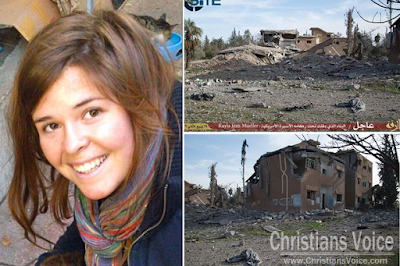 Kayla Mueller was an American aid worker who was enslaved for three years by the Former Islamic State (ISIS) and was killed during the Jordanian air strikes in early 2015. Her fellow captives, who were released, claim that Kayla held on to her faith while the captors tried to convert her to Islam.


This 25 year old girl has been kept as a slave and was reportedly subjected to verbal abuse, tortured and was raped by one of the ISIS leaders. Former hostage Daniel Rye, one among the captives, started to say ,” Oh, this is Kayla, and she has been held all by herself. And she’s much stronger than you guys. And she’s smarter. She converted to Islam”; For which Kayla’s response was,”No, I didn’t!“.

Kayla Mueller defended her faith on Christ, responding bravely to the most dangerous human beings on this earth. everyone were surprised by her bravery. “I would not have had the guts to say that..."