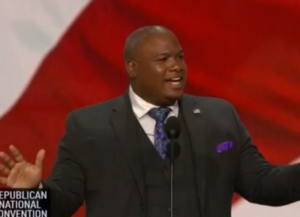 Last night’s Republican National Convention featured a lot of notable appearances throughout the evening (including speeches from Rudy Giuliani and Melania Trump), but one of the most talked-about moments came in the closing moments. Mark Burns, a televangelist and pastor of South Carolina’s Harvest Praise & Worship Center, was invited to the stage to deliver the benediction prayer. But, instead of the typical non-partisan prayers delivered at conventions, Burns ignited controversy by explicitly calling Democratic candidate Hillary Clinton “our enemy.” He said, “Republicans, we got to be united, because our enemy is not other Republicans—but is Hillary Clinton and the Democratic Party.”

Father God, in the name of Jesus, Lord we’re so thankful for the life of Donald Trump. We’re thankful that you are guiding him, that you are giving him the words to unite this party, this country, that we together can defeat the liberal Democratic Party, to keep us divided and not united. Because we are the United States of America, and we are the conservative party under God.