My Thoughts on the Republican Presidential Debate 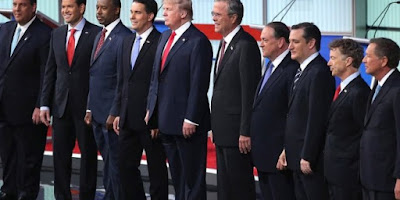 First of all, I’m not a fan of Megyn Kelly….at all. She seems nice and would probably make a good next door neighbor, but she has no business running a debate. The whole scene had more of a tabloid, “Jerry Springer” type feel to it. Rather than asking serious questions about issues it was more like the pretty girl on the playground trying to goad two boys into a fight. Megyn needs to be hosting something like “The View” rather than attempting serious journalism. Her feelings are hurt because of something Donald Trump said about Rosie O’Donnell ten years ago. Then when Donald answers her in typical Donald fashion, her feelings are hurt again. In the post debate analysis she spoke of how “offended” she was by Donald’s response. Megyn, if you’re that sensitive, then get out of journalism. I’m no fan of Chris Wallace either. Brett Baier should have been running that debate by himself. He’s serious, professional, and most importantly…. not a whiny cry baby like Megyn and Wallace are. But I digress.

This debate smelled like a set up from the word go. The very first question was asking for a show of hands for those who would not commit to supporting whoever the Republican nominee is. Everyone knows Trump is the only one who refuses to make that pledge. And he was the only one who raised his hand. They ALL should have. Why would anyone promise support when they don’t know who the nominee is? This proves that the Republicans, just like the Democrats, have a “group think” herd mentality and want to bludgeon anyone who dares to think for themselves. Independence is not allowed. Step in line or pay the price. Of course this is exactly why America is in the dismal state its in today. Republicans and Democrats largely refuse to oppose any party leadership, even when the leadership is borderline satanic. They go along and get along. They don’t rock the boat and they keep their pockets lined. And if you don’t raise your hand and pledge support to whichever hack wins the pony show, then you’re ridiculed. I don’t blame Trump for not going along with such a dorky pledge. I wouldn’t go along with it either.