The Folly of the Modern Western Church 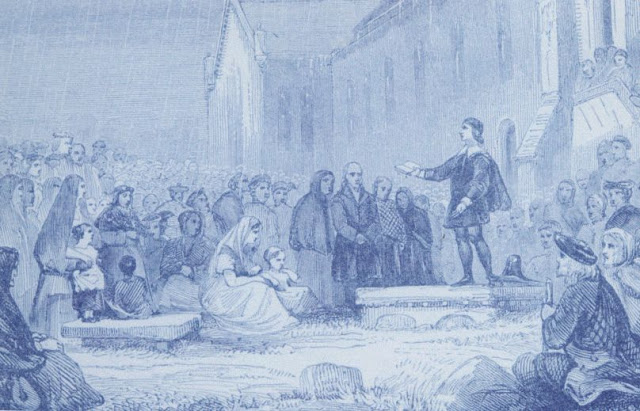 By Al Baker - Posted at Forget None of His Benefits:

“But I have this against you, that you have left your first love.” -Revelation 2:4

The day in which we now live, of course, is not the first time we have faced the folly of leaving our first love. Unfortunately, this has been a trademark of life in the church since the book of Judges. There is, however, always hope in Jesus. Consider this.
By 1630 Scotland was in need of another revival, a time of visitation by God when a whole community is soaked with His presence. Such had occurred five years earlier in the town of Stewarton under the ministry of David Dickson, and that revival no doubt influenced and moved the people of nearby Shotts, not far from Glasgow, to seek a similar blessing. In accordance with the Scottish Presbyterian tradition of seasonal communion services, Shotts set aside several days in June for people from surrounding communities to come together for soul-searching preaching, calling them to repentance and conversion. A few godly Scottish women of royalty who a few years later were sympathetic toward the cause of the Covenanters (those who sought Scottish independence from England), prevailed upon the local pastor at Shotts, John Home, to invite two powerful Scottish preachers for the occasion—David Dickson, whom God had used so powerfully a few years before at Stewarton, and seventy year old Robert Bruce, a man whom some said was the human instrument God had already used to bring conversion to thousands of people. Instead of the usual plan to end the services on Sunday with communion for those who could give evidence of true conversion, the leaders decided to stay another day, closing with a service of thanksgiving on Monday.
That Sunday evening a number of ministers, elders, and leading women, including both the Marchioness of Hamilton and Lady Culross, met and prayed through the night for an outpouring of the Holy Spirit on the people who would gather the next day. We do not have a record of the prayer meeting but we do know they prayed all night, no doubt asking for the Holy Spirit to visit them powerfully in this last preaching service of the communion season. After the prayer meeting, each having gone his own way for personal devotional time, Lady Culross closed the curtains on her bed and for the next three hours could be heard praying earnestly, with great liberty in the Spirit. At the end of this time she called on Pastor Home and strongly urged that he invite young John Livingston to preach the last service.
Read more...
American Church Church History Revival Scottish Covenanters Scottish History