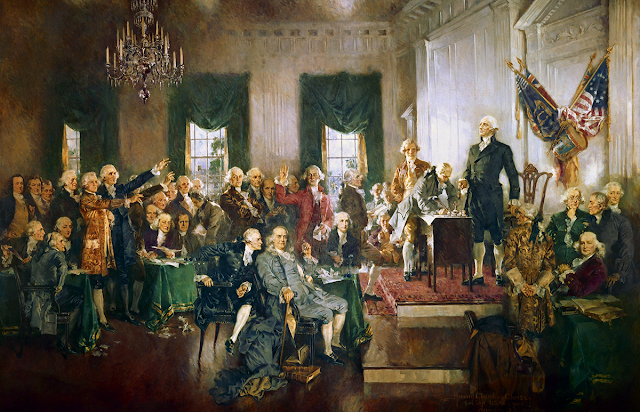 By Jeffrey A. Stivason - Posted at Gentle Reformation:

Several years ago I read Russell Kirk’s The Roots of American Order. Kirk argued, “The the law is revealed to save man from self destruction.”[1]However, by “save” he meant “restrain.” For example, a paragraph later he wrote, “A conviction of man’s sinfulness, and of the need for laws to restrain every man’s will and appetite,influenced the legislators of the colonies and the Republic.”[2]Even Thomas Jefferson, the progressive at that time, was not willing to trust in man’s so-called innate goodness, but “bind him down with the chains of the Constitution.”[3]

When I read statements like these they remind me that our country was founded to be a republic and not a democracy. Just think of the Pledge of Allegiance, which states that allegiance is pledged to the United States of America and “to the Republic for which it stands.” Though it is true that America is a republic it is also true to say that it is a democratic republic. It might be good to distinguish an aristocratic and totalitarian democracy from a democratic republic. In the former, we have either elite rule or mob rule. However, in a democratic republic a national government is limited in power and it operates by a constitution based in large measure upon natural law.

However, it is also true that “our modern moral order, at least in what is called the West, runs back to the burning bush on Mt. Horeb.”[4]In fact, it is not hard to find quote upon quote from our founding fathers and their high regard for the Ten Commandments and the moral and societal order they provide to a nation. However, what was implicit in their thinking did not make it into their Constitution.
Read more...
American History Biblical Viewpoint Christian Ethics Roe v. Wade Sovereignty of the Lord United States Constitution