A way-station to egalitarianism: A review essay of Aimee Byrd’s Recovering from Biblical Manhood & Womanhood 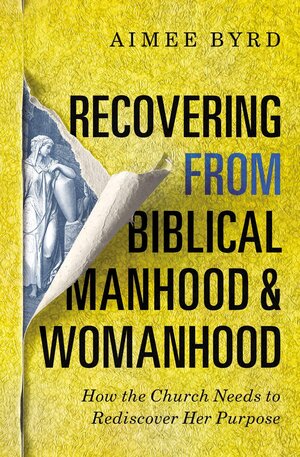 By Denny Burk - Posted at Southern Equip:
Evangelicals have been debating manhood and womanhood for decades, and the conflict shows no signs of subsiding. No little bit of ink is spilled every year by both sides, and many works have trouble getting through all the noise. Such is not the case with Aimee Byrd’s new book Recovering from Biblical Manhood & Womanhood: How the Church Needs to Rediscover Her Purpose (Zondervan, 2020). The provocative title riffs off the name of the seminal complementarian work Recovering Biblical Manhood & Womanhood, edited by John Piper and Wayne Grudem (Crossway, 1991). Byrd takes direct aim at what she believes to be the deficiencies of complementarianism as expounded by its chief proponents, especially the Council on Biblical Manhood and Womahood (CBMW).

Byrd’s views at first blush appear to be a classic narrow complementarian perspective—a male-only eldership with husband as “head” of the home.1 In other words, her view sounds a little bit like Kathy Keller’s view—that a woman can do whatever an unordained man can do in ministry.2 But when you press into the details of Byrd’s argument, it looks like she may be going further than that.