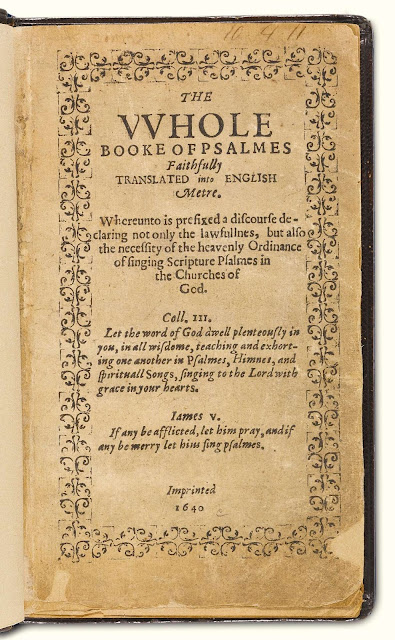 The first book published in colonial America was the Bay Psalm Book. According to the website of the Cambridge Reformed Presbyterian Church:

The book was published in 1640 in what is now Cambridge, Massachusetts in a print shop now long gone, located in what is today Harvard Square...The preface to the Bay Psalm Book was written by John Cotton...(and is) an explanation and defense of the American Puritan understanding that the Book of Psalms is God's hymnbook for the Church. This is a belief that was shared by all Presbyterian churches until the 19th Century." One of the eleven existing copies of this work is on display as "America's First Book" in the Library of Congress. The Bay Psalm Book was used extensively throughout the colonies and went through many revisions and improvements.

One copy of the Bay Psalm Book was sold for $14,165,000 in 2013. That emphasizes the truth found in Psalm 19:10, where the psalmist says that God's words are "more to be desired than gold, even much fine gold"! Watch this short video to see more of the history behind this psalter.