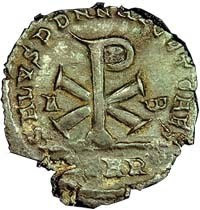 For the first 300 years of Christianity there was barely a breather from violent persecution. Roman emperors harangued Christians by confiscating church property, arresting worshippers, and even executing them in arenas like the Colosseum as entertainment. That persisted until the glorious year of 313 AD. Christians were granted by their government an unprecedented relief from persecution and even an encouragement to convert others to their faith.

On 28 October, 312 AD Constantine and Maxentius clashed in a military battle outside Rome for the highest position in the Empire. The day before, while mustering his troops, Constantine observed a pattern in the clouds that looked to him like the overlapping of two Greek letters Chi and Rho, what to us would be an X with a P over it.

These two letters happened to be the first letters of the Greek word “Christ.”

He saw this portent as a divine communiqué in which Jesus was promising him victory. He immediately ordered his troops to emblazon their shields with this symbol and to fight in the name of Jesus Christ.

Constantine won the battle, marched into Rome, and dutifully gave credit to Christ. He assumed the throne, translocated his capital to Byzantium, which he renamed Constantinople, and in February of 313 AD he issued the world’s most helpful civil document for Christians: the Edict of Milan.

This edict made Christianity legal, returned confiscated property, and stemmed the tide of persecution, to usher in a golden age of freedom for Christians unknown to anyone before. Although he didn’t claim to be a Christian himself until later in life—he was baptized on his deathbed—Constantine supported the church financially, built churches, exempted pastors from paying taxes, promoted Christians in his government, and in 321 he declared Sunday a day of rest for all citizens.

Whether Constantine was a true believer is a matter of debate among scholars, but there is no debate about what kind of blessing it is for Christians to have a leader who protects them from persecution. And fortunately for us, God has told us how to get and keep one of those leaders. So, …