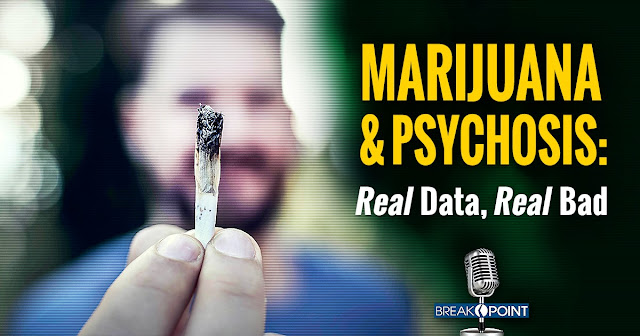 By John Stonestreet and Roberto Rivera - Posted at BreakPoint:

The pitfalls and perils of marijuana legalization are well-documented. But whenever we discuss that research here on BreakPoint, we’re accused of not having the right research. What that means is that we’ve used studies that contradict the very vocal advocates of weed.

Well, let’s see what happens when we cite The British journal The Lancet, which, along with the New England Journal of Medicine and the Journal of the American Medical Association, is considered the “gold standard” for peer-reviewed medical research. It doesn’t get more “real” than being published in The Lancet.

A just-published study in The Lancet involving, among others, researchers at King’s College London, compared 900 people who had been treated for psychosis with 1,200 people who had not. Sample participants were drawn from across Europe and Brazil.

Both groups were surveyed on a host of factors, including their use of marijuana and other drugs. The study’s authors concluded that “people who smoked marijuana on a daily basis were three times more likely to be diagnosed with psychosis compared with people who never used the drug. For those who used high-potency marijuana daily, the risk jumped to nearly five times.”