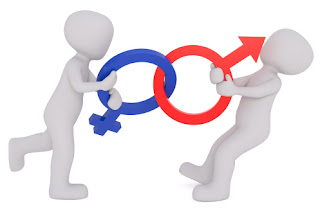 By Bob McEvoy - Posted at The Salty Scrivener:

Text. Matthew 19:4 And He answered and said to them, “Have you not read that He who made them at the beginning ‘made them male and female,’


Matthew 19 deals with important ethical issues and opens up a discussion on a modern ethical issue, TRANSGENDERISM. It’s an important issue to address, because nowadays some don’t seem to know the difference between men and women.

Am I a man or a woman? Nowadays, there is a political movement, a huge pressure-group of people who are promoting ‘transgenderism.’ It is the notion that there is a difference between your biological sex and your gender. You can be born as a man, and yet believe that you are a woman, and vice versa. You can be ‘confused about your gender.’ You can be ‘gender fluid.’ Think of the implications.
Madness? YES, but modern society is buying it all. Christians need to be aware of these matters and need to know how to react, with firmness, biblical faithfulness, and loving concern. So note:- ...