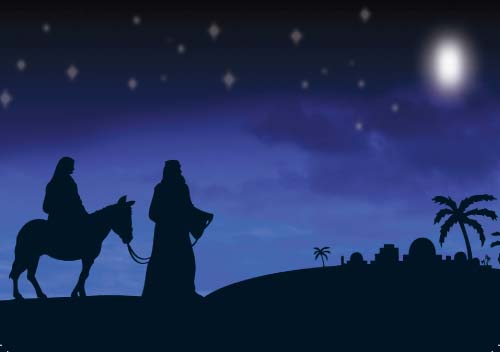 Around this time of the year, liberal churches like to focus on certain aspects of the story of Christ’s nativity in order to make political commentary. One of the favorite approaches of such liberal commentators, whether the pope of Rome, the archbishop of Canterbury, or liberal churches in the USA and Europe, is to present the baby Jesus as a migrant or a refugee. For example, a church in Massachusetts recently erected a “nativity scene” in which “the baby Jesus” was locked up in a cage, separating him from Mary and Joseph, while the “three wise men” were blocked from reaching Jesus by a wall or a fence. Such a scene was designed to provoke a conversation about immigration, constituted a protest against the separation of children from their parents by U.S. border control, and was designed to raise awareness about the plight of caravans of migrants attempting to cross the same U.S. border.

It is not my intention to make a political statement about U.S. immigration policy (or even EU immigration policy for that matter), but to explain the biblical text, which has been hijacked and twisted in an attempt to push a particular political and moral agenda. Many of the same liberals, of course, will champion abortion, but will cry foul if the same biblical passages are used to argue against the evil of murdering the unborn. For example, had Mary (the mother of Jesus) and Elizabeth (the mother of John the Baptist) been alive today, they could have—if they had been so wickedly inclined—walked into an abortion clinic and terminated their pregnancies. Mary, who in Luke 1:42 was perhaps only a few weeks pregnant at most, could have taken an abortion pill, which is now readily available in many Western countries; while Elizabeth, who in Luke 1:36 was six months pregnant, could have opted for a surgical procedure in a state-funded abortion facility such as Planned Parenthood. While any right-minded Christian shudders at the idea, many of the same liberals who promote the “Jesus was a refugee; therefore, we should have open borders” narrative are champions for the freedom of choice of women like Mary and Elizabeth, and would even demand that the taxpayer fund the right of abortion. Liberals, therefore, are selective in their “biblically-based political outrage.”

Two parts of the history provide fodder for such liberal theologians. First, the earthly parents of Jesus, Mary and Joseph, had to make a trek from Nazareth in Galilee to Bethlehem in Judea in order to comply with a government-mandated census. Therefore, Jesus was a migrant. Second, Joseph and Mary were forced to flee with their young son, Jesus, to Egypt in order to escape from King Herod. Therefore, Jesus was a refugee. Add to that the words of Jesus in Matthew 25:40, “Inasmuch as ye have done it unto the least of these my brethren, ye have done it unto me,” and the liberal makes his case: Christ demands open borders and compassion for refugees and migrants.