THE 1780 PRESBYTERIAN REBELLION AND THE BATTLE OF HUCK'S DEFEAT 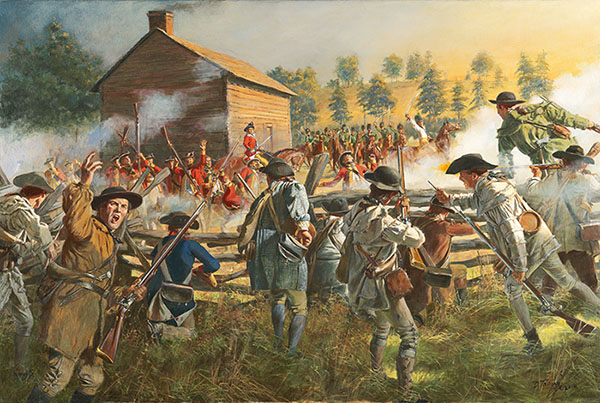 Coming predominantly from former homes in Pennsylvania, Maryland and Virginia, the first permanent European settlers began arriving in the area west of the Catawba River during the 1750s. These settlers were overwhelmingly Scots-Irish Presbyterians who traveled here by way of the "Great Wagon Road." Allied by both blood and religious affiliations, the Scots-Irish pioneers moved through the Shenandoah Valley and the present-day towns of Winchester, Lexington, and Roanoke in Virginia, and eventually pushed south to Salisbury, North Carolina. From here they drifted southward along the Catawba into South Carolina.

In order to set the stage for the 1780 Presbyterian Rebellion, we first need to take a look at the circumstances which drew these people to the "Back Country." Problems for the Scots-Irish began in Northern Ireland and the Ulster Plantation in the early 1700s. Chief among the problems behind the mass migrations of the "Irish Presbyterians," as contemporary writers termed them, was the passage of the Test Acts of 1704 and 1705 during the reign of Queen Anne. By the passage of this act, Parliament sought to establish the Anglican Church as the "official" Church throughout the British Isles. The Acts declared that the Presbyterian Church in Ireland was without legal recognition. Furthermore, the Presbyterian clergy were forbidden to perform marriage ceremonies and those who had previously been married within the Presbyterian Church were declared to be living in fornication. The Acts further stated that any one who subscribed to the Presbyterian Church could no longer hold any military or civil position, no matter how minor. This greatly angered most of Ulster as the majority of the region's officials, from Magistrate to Tax Collector to Postmaster were Presbyterian. In Londonderry, for instance, 10 of the 12 aldermen and 14 of the 24 burgesses were immediately put out of office for being Presbyterian even though these same men had fought in the 1689 siege of Londonderry on the side of the Parliamentary or Cromwellian forces against the Roman Catholic army of James II.1 This act of betrayal, in the minds of the Scots-Irish, laid the foundations for relations which many Scots-Irish developed towards the British and the Crown in particular.

Following the Test Acts, the great Scots-Irish migrations began in earnest, as thousands upon thousands left Ulster for the American colonies where they could practice their Calvinistic brand of religion. It has been suggested that as much as 1/3 of the Protestant population of Ireland left for the American colonies between 1731 and 1768. After 1741 an estimated 12,000 left each year.2 These numbers, however, do not compare to those which left between the years 1771 and 1773. Many of these came because of the failed 1770 uprising of Ulster Scot (as they were known in Northern Ireland) tenants against their landlords in Ulster. Those involved in the revolts and preceding movement became known as the "Hearts of Steel" and "Hearts of Oak," or "Steelboys" and "Oakboys." The agrarian revolts were ruthlessly put down by the British Crown and ring leaders were rounded up and hung. Thousands sought safety in the American colonies. During the brief period from 1771 to 1773, an estimated 30,000 fled to the shores of America, a large proportion of them coming directly to South Carolina and the Backcountry. All total, by the eve of the American Revolution more than a quarter of a million Ulster Scots, or Scots-Irish, had come to the American colonies in less than 50 years. Some ethnologists have even suggested that the total may be closer to twice this number.3