The Mecklenburg Declaration of Independence, a Year Before Thomas Jefferson’s Document 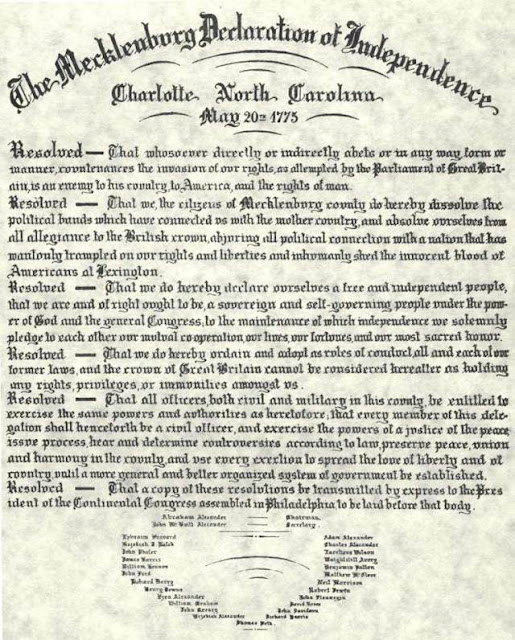 Some of you realize, I live in North Carolina, a state draped in rich history. One of those events is the the Mecklenburg Declaration of Independence. Charlotte, North Carolina will celebration this event on Sunday: A year before Thomas Jefferson’s “Declaration,” there was Meck-Dec, as we in the area fondly call it.

After the French and Indian War, King George and the British Parliament sometimes ignored the American colonies and sometimes saw them as a source of income for the numerous wars in which they engaged. The Stamp Act and the taxes on tea, however, provoke the colonists into breaking with Great Britain. When the British Army occupied Boston and close the port, word of the aggression quickly spread, even to the backwoods of Mecklenburg County in North Carolina. Not liking what they heard, those within the county authorized Colonel Thomas Polk, the commander of the county militia, to call a meeting where the “aggression” might be discussed. Two representatives were named by each of the nine militia companies within the county. Whatever decision theses men would make would be binding on the county’s citizens. These men met at the county courthouse, which was located in Charlotte, a town named for King George III’s queen, Charlotte of Mecklenburg-Strelitz.

This meeting took place on Friday, 19 May 1775. Imagine how these men felt when an express rider, on the very day of the meeting, brought word of the Battle of Lexington and the Battle of Concord. The news that British soldiers had killed and wounded British citizens (which was what the Americans considered themselves at the time) brought a new urgency to the discussion taking place in Charlotte.

Out of these discussion came the five resolutions that make up the Mecklenburg Declaration of Independence. It was sent to the North Carolina representative at the Continental Congress, and it declared that Mecklenburg County had separated from the Great Britain.