More Christian Than Democrat or Republican 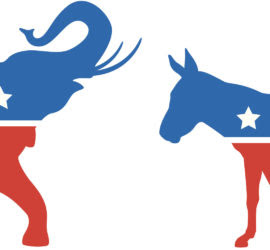 By Bruce Ashford - Posted at 9Marks:

Given the increased polarization of American politics and public life, the question is frequently raised as to whether Christians should identify themselves with either major political party or—by association—the political ideologies undergirding them. I answer that it is permissible and often wise to participate in party politics, but we must be circumspect in doing so, making clear that our allegiance to political parties is tentative in light of our allegiance to Christ. We should never allow our witness to be undermined by inordinate allegiance to a political party or inappropriate forms of activism on behalf of that party’s agenda.

In order to make the case for this view, we must discuss the proper relationship between both religion and politics and church and state, before going on to discuss the legitimacy of affiliating with America’s major political parties and ideologies.

“Never discuss religion or politics with those who hold opinions opposite to yours, wrote Thomas Haliburton in 1840. “They are subjects that heat in handling, until they burn your fingers.” Haliburton, a Canadian politician and judge, expresses the view of many modern Westerners: we shouldn’t talk about religion and politics in polite company, especially if the two subjects are joined together and even more so if the people in the room don’t agree. A similar sentiment is that religions shouldn’t be brought into the public square at all, especially not into politics.