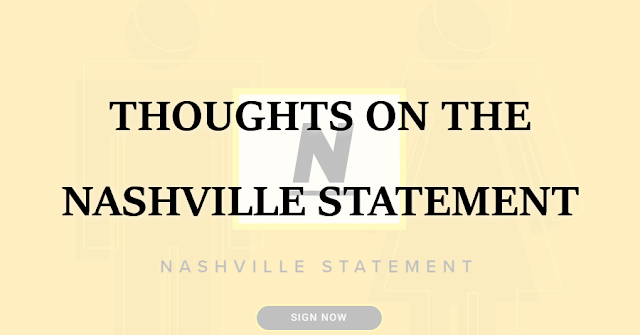 A Complementarian parachurch group, the Council on Biblical Manhood and Womanhood (CBMW), recently published a statement of affirmations and denials regarding biblical sexuality, The Nashville Statement. This brief post will express my thoughts on the statement itself, as well as the manner in which it was put forward.


Praise for the Nashville Statement

Despite the criticisms below, I truly believe God is using this statement for his own glory and the good of his church. The statement itself affirms many fundamental biblical truths, such as marriage being between one man and one woman; the rejection of extra-marital intercourse, homosexual and polygamous acts and relationships; that there are “divinely ordained differences between male and female” and that we should identify as our God given biological sex; that sexual desires, not just actions, can be sinful; that “the approval of homosexual immorality or transgenderism” is not a matter of moral indifference; that sexual sin can be forgiven by the grace of God in Christ; that “transgender self-conceptions” can be forsaken by the grace of God.

These may seem like basic Christian beliefs, and one may question the need for such obvious statements, but the fact is that these things are either not so obvious for many professing Christians today, or even outright denied by them.

Many conservative evangelicals find themselves in churches and communities where affirming the biblical teaching on sexuality is difficult, the Nashville Statement gives them something to point to and use for starting conversations on this emotionally charged topic. Perhaps evangelical churches will even adopt it or formulate new statements to make it clear what their church believes about this issue.

Progressive, LGBT-affirming, apostate so-called Christians quickly wrote a rebuttal, the Denver Statement, and many have taken their virtue signaling to Twitter. These reactions vindicate the need for the Nashville Statement and demonstrates the truth of the following scripture: “For there must be also heresies among you, that they which are approved may be made manifest among you” (1 Corinthians 11:19). The reaction to Nashville Statement has revealed how many tares have been sneakily sewn among the wheat (Mat. 13:24-30).


“It is God’s purpose to permit heresies, and to overrule them for this end: that his graces may the more shine forth, and that even heresies (contrary to the intentions of Satan and heretics) may make manifest who are approved.” [1]

Unbelievers and “Progressive” so-called Christians alike have joined together in condemnation. “Hatred of religion often produces mutual harmony among wicked men, so that those who formerly had nothing in common unite together to extinguish the name of God.” [2]