We Have Not Even Heard That There Is a Holy Spirit 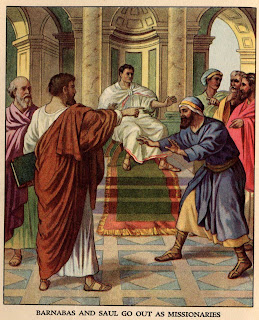 It’s a funny little story that could only have happened during the church’s earliest days. Paul has been on one of his missionary journeys and, while traveling through Asia Minor, stumbles upon a little group of believers. But there’s something unusual about them, something missing. Here’s how Luke describes it:

And it happened that while Apollos was at Corinth, Paul passed through the inland country and came to Ephesus. There he found some disciples. And he said to them, “Did you receive the Holy Spirit when you believed?” And they said, “No, we have not even heard that there is a Holy Spirit.” And he said, “Into what then were you baptized?” They said, “Into John’s baptism.” And Paul said, “John baptized with the baptism of repentance, telling the people to believe in the one who was to come after him, that is, Jesus.” On hearing this, they were baptized in the name of the Lord Jesus. And when Paul had laid his hands on them, the Holy Spirit came on them, and they began speaking in tongues and prophesying. There were about twelve men in all. (Acts 19:1-6)


There in Ephesus, Paul comes across a group of disciples. What exactly it means that they are disciples has been the subject of much debate. Are these genuine pre-Pentecost believers who have trusted in Jesus Christ but not yet heard about the Holy Spirit? Or are they disciples of John who have simply never been told of Jesus? For our purposes it probably doesn’t much matter. Whatever the case, Paul quickly comes to see that something isn’t quite right.