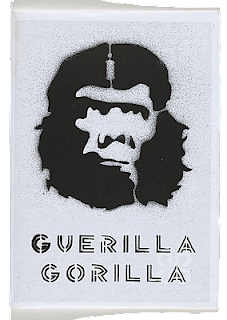 Eleven years ago the film Idiocracy was released. I have only seen portions. I am not a great fan of the comedy of errors. It is difficult for me to watch Seinfeld because of the George Costanza character. Jason Alexander did a brilliant job in making Costanza almost utterly disagreeable. Nevertheless, evidence seems to be mounting that Idiocracy was prophetic and that perhaps I should make myself watch it. Apparently it has not taken 5 centuries for the Idiocrats to assume power.

I call the grammar and writing column “Grammar Guerrilla” in part because guerrilla (or guerilla) is a homonym for gorilla (i.e., they sound similar when pronounced) but the two words, obviously signify very different things. A grammar gorilla would be a silly thing indeed. A grammar guerilla, however, could be a very useful thing indeed. A guerilla is an irregular (not in a standing army) paramilitary resistance fighter: The Heidelblog is conducting a guerrilla war against bad theology, bad history, and bad grammar. A gorilla, however, is a great ape: The gorilla exhibit at the Wild Animal Park is one of my favorites. I did not expect that I would have to explain the difference but apparently I was wrong.

Doug Adler, a tennis commentator, was recently fired by ESPN for describing Venus Williams (a female African-American tennis player) charging the net and winning a point as a “guerrilla effect.” The commentator was referring to the suddenness of the act and its decisive effect during the match. It is true that the words guerrilla and gorilla are homonyms, i.e., they sound the same when pronounced, but it is also true that there is no such expression as “gorilla effect” or “gorilla tennis” nor is it clear what those would signify. “Guerilla Tennis” is an expression in tennis, however. In 2012, Sports Illustrated ran a story on “Guerilla Tennis.” In 2004 the estimable New York Times itself published the expression “guerrilla tennis.”