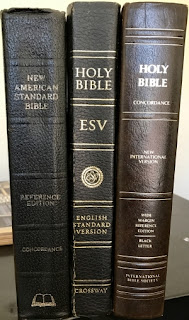 History
For most Americans, through the first half of the 20th century, the KJV was the English translation. The 1901 ASV had made a dent (and before that the Revised Version in the UK) and the 1946 RSV made another dent, particularly as it was adopted by the liberal mainline denominations. Among evangelicals, however, the KJV was probably the dominant translation until the 1970s, when the NASB published their complete translation. The 1970s saw a number of other translations including the LB (1971) and the NIV (1978). For many evangelicals, through the 1980s, the NIV became the preferred translation. It was adopted by many churches and by some denominations. Work on the ESV began in the early 1990s. Many evangelical and Reformed folk appreciated the NIV and the NASB but wanted a translation that was not quite as stiff as the NASB sometimes seemed and not quite as paraphrastic as the NIV too often seemed. Some of us were not comfortable either with the textual basis for the NJKV or with the translation philosophy. The ESV, which began as a revision of the RSV, first appeared in 2001. When the NIV translation committee signaled their intent to produce “inclusive language” versions of the NIV, thereby blurring the lines in Scripture between males and females, many evangelicals turned to the ESV.