By Persis - Posted at Tried With Fire: 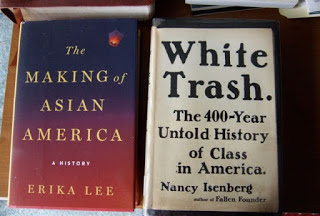 This has been a time of raising my own awareness. You would have to be living under a rock to not realize that America is becoming an increasingly divided nation over the issues of race, class, and immigration. Reading Divided by Race, at the recommendation of an African American brother, was eye-opening. Here you have professing believers who have almost opposite assessments of racial issues within the American church. Why do we think so differently? What produced these two wide trajectories? Then came the racial incident involving Michael Luo, deputy metro editor of The New York Times. Now it was much closer to home because, after hearing his story and many others that poured forth, these were my people. Their stories are very much like mine.

So to gain more understanding, I began to read and listen. The first book was The Making of Asian America by Erika Lee. This was a fascinating book and quite a feat given its scope. I had no idea that Asian immigrants first came to Central America prior to English colonization. ...