How Will You Run Your Race This Coming Year? 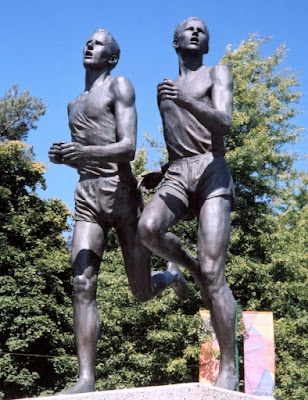 It was May 6th, 1954, and a miler named Roger Bannister became the first human to ever have run a mile recorded in under four minutes. That world record lasted only six weeks, when an Australian, named John Landy, beat his record by more than a second. The rivalry was not over though, as the Empire Games were scheduled for August of the same year, and Landy and Bannister were set to square off in one of the most anticipated races in history.

The two runners could not have been more different. Landy loved to set the pace and start off strong, he usually led most of his races from start to finish. Bannister was different, he liked running from behind most of the race, only to take over first place in the final lap. The final proved those stereotypes right as Landy led for most of the race, with Bannister behind by quite a big margin going into the final lap. But then, something happened; the crowd started cheering as Bannister made his move and Landy began to get nervous, and in a moment of panic, Landy broke racing’s number one rule, don’t look back. As he looked over his left shoulder, Bannister went zooming by on the right to take first place in the race that would be forever remembered as the “miracle mile.”

This moment has served coaches well for all the years since as a lesson to runners to keep their eyes on the finish line. This moment was so big that to this day in Vancouver, a bronze statue stands depicting the moment when Landy looked over his left shoulder. Landy took the loss in good spirits as he famously said, “While Lot’s wife was turned into a pillar of salt for looking back, I am probably the only one ever turned into bronze for looking back.”

While we may never experience the level of embarrassment that John Landy did that day, despite the fact that our race is eternally more important than the “miracle mile” was, we, too, must realize that all too often we get distracted as we are running our race. Whether it is the simple distractions of life, or whether it is the sin or sins of our choice, we are all too easily prone to wander and prone to slow down in our race.

The writer of Hebrews reminds us that our race is very difficult. Hebrews 11 is an incredible reminder of that. He lists person after person that, though they had faith and were commended for it, suffered greatly at the hands of the world. Some were even sawn in two, Hebrews 11:37 tells us. It’s incredible to think about how well these men and women ran their race despite the incredible trials they faced.

As we look to the new year, I’d like to encourage us to run a race that pleases our Savior. If we follow the advice of Hebrews 12:1-2, I believe that we will do well.