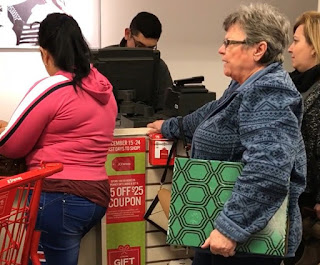 Let me introduce you to Conservatism without Christianity. This brand of conservatism holds many faithful church attendees, but the Bible is not their final authority. In these churches, the flag stands erect behind the pulpit, sermons speak of hope—a return to the old days, or of fear—of those enemies of flesh and blood, and Donald Trump has become their savior, and they his disciples. Nevertheless, church attendance is optional, because the ultimate authority is not scripture. Their theology is soaked in American Exceptionalism, and their God is America.

One of these adherents stands in line at JC Penny. As a newly converted disciple of Donald Trump, this lady speaks her mind as Donald Trump speaks his mind. She fears not the consequences, relying on the protection of her savior. In an encounter with her enemy, the Mexicans, feeling triggered, she speaks boldly to their face, speaking of them in words he speaks.

Donald Trump didn’t start this Conservatism, rather he is their long awaited savior. A key doctrine of this Conservatism is identity politics. The former enemy had black skin, talked differently, lived in the projects, inner city, and other places away from the suburbs, and while it’s no longer appropriate to openly speak negatively of this enemy, the non conformists are routinely neutralized. If confronted by police, this enemy of old must assume guilt, conform, and not speak against injustice. In their America, blue lives matter, all lives matter, but not black lives matter. If one wears a hoody, listens to rap music, and has tinted windows or a mean mug, they are still perceived as a threat and the authorities are called.