Six Observations From the Fox News GOP Debate in Detroit 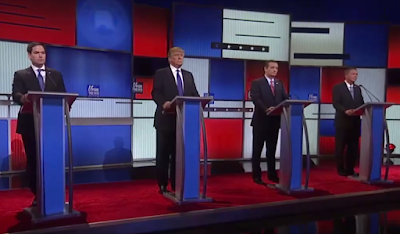 Fox News held its last Republican presidential debate in Detroit tonight. They held the very first GOP Debate for the 2016 race seven months ago in Cleveland, OH. There are only two scheduled debates left – the CNN hosts one before the Florida primary in Miami, FL on March 10 and a debate to be held on March 21 in Salt Lake City, UT.

1. If you planned to learn about a candidate’s ideas on an issue you were disappointed.

Debates anymore, and it is especially true this cycle are no longer about issues, but how can we achieve ratings by getting the most fireworks. Mission accomplished. Part of that is the media’s fault, but that’s not helped by Donald Trump’s presence during debates either. I will say having only four people on stage is far better than seven or eight.

2. Trump is less effective when he’s fighting a two-front war.

If Trump has to just deal with one candidate or two he’s pretty effective at dealing with that. This debate and last Cruz and Rubio have drawn blood.

Trump was forced to have to discuss Trump University and the lawsuit filed against him. He was made to look like he was hiding something by refusing to request that the New York Times release the audio of their off-the-record conversation. Also Cruz tied Trump’s donations to Democrats to specific issues that were ushered in like Obamacare and the Gang of Eight bill. Some will say attacks like these won’t work, I would disagree. Donald Trump was poised to do even better on Super Tuesday, but he underperformed his poll numbers in several states and lost four states. In terms of delegates he really didn’t do much better than Ted Cruz. It could have been a lot worse. The attacks work.