Why Do Mohler, Grudem Serve on ‘Dignity of Life Board’ for Abortion Pill-Promoting Candidate?

By J.D. Hall - Posted at Pulpit and Pen: 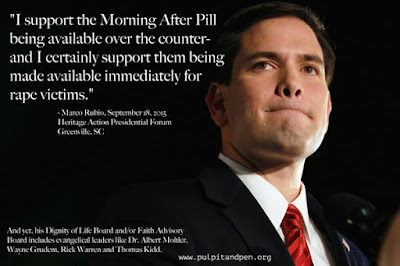 As you are aware and as we have previously informed you, the Evangelical Intelligentsia (EI) chose their candidate some months back, and it was the moderate and Roman Catholic candidate, Marco Rubio. Led by EI ecumenist, Eric Teetsel, the Intelligentsia have compromised the Gospel for their chosen candidate, widely having told us that the candidate who is “fully doctrinally and theologically aligned with the Roman Catholic Church” is somehow both a Christian and evangelical (source link). Along with social progressives like Russell Moore, jumping on that bandwagon has been conservatives with previously stellar records, including Southern Seminary president Albert Mohler, theologian Wayne Grudem, and historian Thomas Kidd – all of whom serve on Rubio’s Dignity of Life Board or Faith Advisory Board (source link).

A special hat-tip to professor Robert Gagnon to posting this article earlier, because according to Life Site News, Rubio is on the record supporting the over-the-counter availability of an abortion drug, the so-called “Morning After Pill.” Lisa Bourne writes…