Like the Blind Leading the Blind: Donald Trump and Evangelicals 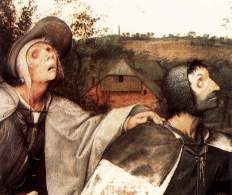 This morning, like most mornings now, I found myself reading an article on Donald Trump’s candidacy. Everyday I ask myself the question, “How can so many American Evangelicals support such an openly narcissistic, immoral, power driven man?” Sarah Palin endorsed him, Jerry Falwell Jr., the president of Liberty University, endorsed him,[1] and not too long ago, a poll was released that showed that Evangelical Christians as a whole are gravitating to Trump.[2]

But, this article I read today gave me a much needed answer as to why Americans and specifically Evangelicals are gravitating toward Donald Trump. The author, Gina Dalfonzo, asserted, and rightfully so, that when fear is driving a certain people group, they will seek safety and power in the wrong places. The author then went on to make the connection that the American people, specifically anti-establishment republicans, are putting their faith in Donald Trump, because he projects an unwavering, albeit narcissistic, strength. She even takes a particular jab at American Evangelicals it seems, when she states, “Some who have professed faith in Jesus Christ are lured by a man who openly puts all his faith in power and money, the very things Christ warned us against prizing too highly.”[3]