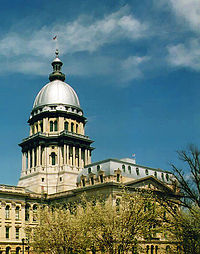 Who would have thought that the legislature would still be in session without a budget at this late date in the year? Thanks to the courts, which require the state to continue to make payments, there has been little or no pressure on the legislature, which presented a budget that ran $4-5 in the red to the governor. After the governor vetoed the budget, there has been little to no action on putting a budget in place.

As a result of court ordered payments, it looks like the state is on target to run a deficit of nearly $5 billion--is that why the legislature is not doing a budget? Why don't we have a court order for the legislature to stay continuously in session until a budget agreement is reached? Doesn't the state constitution require a balanced budget? Why are the courts ignoring that? (I guess I just had to get that off my chest.)

SB 1564, the bill that amends the medical right of conscience is still on the table in the House. It seems that bills promoting a liberal agenda and undermining the basic rights of conscience, have a continuing life to them and can be called at any time, which pro-life legislation is not even given the light of day by the legislative leaders--who make these decisions.

The last legislative update asked for you to act two items of action. The first was this bill, which was called for a vote to amend it to make it possible to pass with 60 votes instead of 71. The amendment passed, but because a roll call vote was asked for, it became evident that the sponsor did not have the votes to pass the bill at this time. If the speaker begins to lean on people for the passage of this legislation, it will likely pass. So:

Please call your state representative and ask him or her to vote NO on SB 1564. The switchboard at the Capitol is 217-782-2000. If you do not know your representative you can search at: http://www.elections.il.gov/districtlocator/addressfinder.aspx

The second action item was to contact the governor's office asking for a veto or amendatory veto on HB 217, the Anti-Conversion Therapy legistation. The sad news to report is that the governor signed the bill into law, thereby removing "conversion therapy" (we call it reparative therapy) as an option for any minor who may even desire to have such therapy. Please be praying that we can find an appropriate litigant in order to file a lawsuit against the state.

Because of all the police shootings, theater shootings, and church shootings across the nation, some Illinois legislators are considering re-instating the death penalty because it is deserved for such crimes.

Thank you for your prayers and financial support. May God richly bless you!!! We ask for your continued prayers for health, strength, and wisdom to do the work we have been called to do.