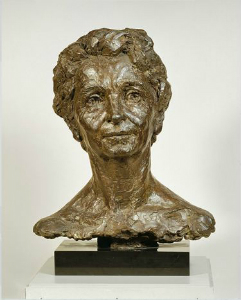 A group comprising mostly black pastors has made a strong request to the Smithsonian Institution regarding a display honoring Margaret Sanger, founder of Planned Parenthood and supporter of black eugenics.

The Smithsonian National Portrait Gallery prominently displays a bust of Sanger (right) in "The Struggle for Justice" exhibit. The exhibit features other notables such as Dr. Martin Luther King, Jr., Rosa Parks, and George Washington Carver.

But Bishop E.W. Jackson, who heads S.T.A.N.D. as well as Ministers Taking a Stand, is objecting to Sanger's inclusion in the gallery.

"It depicts her as a hero of justice – and of racial justice," he explains. "I mean, she's associated somehow with Martin Luther King, Rosa Parks – and the implication is that she's been some sort of champion for racial justice in America and somebody who Americans in general, and black Americans in particular, ought to support or admire. And nothing could be further from the truth."