The case for secession; an Obama Legacy

By Mark Vogl - Posted at The Nolan Chart: 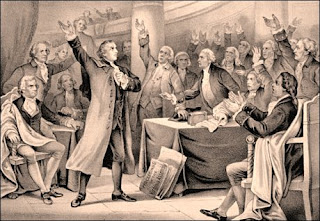 It is vitally important to recall that each of the thirteen colonies were a nation-state unto themselves. England had addressed the Peace Treaty to each of the thirteen, not to one centralized government. This is vital to understanding the concepts of consent of the governed, and secession, along with state sovereignty. The question placed before each state was; are we better off united to the other colonies, subordinating ourselves to a limited federal government?

When the thirteen colonies first united in the late 18th century, the arguments for surrendering a portion of each states’ sovereignty to a federal government were relatively straight forward; defense, commerce, resolution of disputes between the colonies, international relations and trade.

In terms of defense, the colonies had to look at the larger world, the threat of Amerindians on their frontier, and disputes within and between the colonies. The world was full of bully states, primarily England, France and Spain who were actively colonizing the world and could easily engage and defeat most of the colonies individually. Then there was the threat of the Amerindians and the task of moving west to settle a continent. And, troubles between the colonies or states were not uncommon. So mere survival and peace were a foremost reason for surrendering some state sovereignty to a central government. At the time of the Articles of Confederation, war was a real consequence the newly independent colonies wished to avoid. But even so, the separate colonies were very resistant to giving power to the central government.

With respect to foreign relations, the colonies had to assume aggressive tendencies by European powers and feared that a foreign power might conclude a treaty with one state, or group of states to the determent of the others. In addition, acting in a united fashion with foreign powers could result in benefits for all. Whether they liked it or not, and despite being an ocean apart from Europe, there was a bigger world out there that had to be dealt with.