Greear’s “Gaining by Losing” – A Review

Posted at The Reformed Reader: 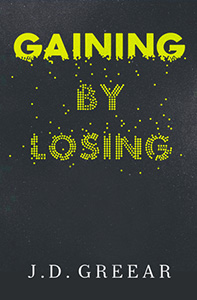 One of the newer church planting/missions book on the market is J. D. Greear’s Gaining by Losing (Grand Rapids: Zondervan, 2015). The book doesn’t give the details of church planting, but it does tell established churches some basic principles for and motivations to plant churches. There are two main parts to this 253 page book: first, a sort of introduction; second, Greear’s ten “plumb lines” for sending/planting. There are also two appendices that give more detail about missions and church planting.

The Good:
There are a some strengths to this book. First, it is clearly gospel centered. The main point of the book is that the gospel is central in the Christian life and in church planting/missions. It was also a good reminder for Christians and churches to be outward focused; Greear clearly stated over and over that churches must be evangelizing at home and abroad.

The Not-So-Good:
There were some weaknesses to the book as well. In my opinion, there was too much humor (some cheesy, some seemingly forced) and too many stories about Greear and the church he pastors. I realize these critiques are small and subjective, but for me they did detract from the book.

I do have some bigger and less subjective concerns about the book as well. First, Greear started the book with a sort of building block of his methodology based on a debatable interpretation of John 12:24. Typically that verse has been understood to be referring to Jesus’ death and the fruit that it brings (the salvation of his people). Greear, however, says that verse is about taking our “hands off of what little portion [God has] given to us, ‘die’ to our control of it, and plant it into the world” (p. 16). “Jesus presents a very clear choice: preserve your seed and lose it; plant your seed for his sake, and keep it through eternity” (Ibid.). “Life for the world comes only through the death of the church” (p. 20). In a word, Greear says that we have to give away our resources (die) plant seeds (plant churches/share the gospel), which is what Jesus talks about in John 12:24. This interpretation is debatable, and therefore from the outset I was hesitant to accept Greear’s application of the text. So the whole book for me started off on the wrong foot. (There are a few other places where I thought some texts were misinterpreted and misapplied as well, but I don’t have the space here to explain them all.)