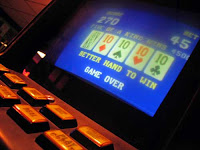 Lawmakers on both sides of the aisle say a gaming expansion is necessary to provide revenue needed to fill the budget shortfall. Gov. Bruce Rauner has indicated a willingness to include gaming as part of a budget solution, saying Chicago could use the revenue to fund a portion of police and fire pensions.

Gaming is not directly part of budget negotiations, but it is being talked about as a potential source of new revenue to help fill a shortfall in capital projects, pensions or education, Rita said. A gaming expansion bill would be tackled only after the budget is settled. There are several options for a gaming expansion, from a Chicago-only mega casino to five new casinos across the state, reported the Rockford Register Star. Read more: http://www.rrstar.com/article/20150711/NEWS/150719895?template=printart

The Waukegan City Council earmarks the money to help fund its police and fire pensions.

Lotteries, payday lending, and the swindling of America's poor

The lottery is a particularly awful example of political corruption. Here government is raising revenue by selling the Powerball dream of wealth without work. Studies in a number of states have shown that lottery ticket sales are concentrated in poor communities, that poor people spend a larger portion of their income on tickets and that the poor are more likely to view the lottery as an investment.


. . . Business and government in many states have entered a full partnership on payday gambling - moving gaming out of destination resorts and into malls and riverboats, closer to middle- and working-class gamblers. State governments raise money by taxing revenue generated by slot machines that are really sophisticated computers, designed to encourage players to enter the "zone" and play "to extinction." Compulsive behavior is the intended goal of the software program, and thus the intended goal of state legislators who would rather encourage addiction than ask the broader public for taxes. Read more