Hope in the Wake of Planned Parenthood 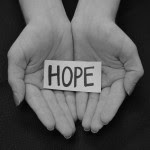 I just finished watching a second video put out by the Center for Medical Progress that–as unbelievable as this sounds–is more damning than the first. It’s impossible to watch a video like this and not cry or feel anger. Someone talking with excitement about selling baby body parts shows the callousness of humanity reaching new depths.

Yet these videos made me have sympathy for a group of victims I had never thought of before–namely mothers who have had an abortion. Many of these women were pushed into this situation. They bought the lie–that the life inside of them didn’t matter, at least not as much as their own lives do. They allowed the workers at Planned Parenthood to tell them that abortion was what was right, that there is nothing wrong with it, and that the “thing” inside of them was just a clump of cells. They were led to believe by the counselors there that they had to do what was right for them, and not for their baby.

And they did it. They got the abortion, possibly even through tears.

Now, perhaps years or decades later, they wake up to realize that while the Planned Parenthood workers were telling them their baby wasn’t real enough to keep, those same workers turned around and sold the scraps. To see their boss joking that, with any luck, they could get a Lamborghini out of it.